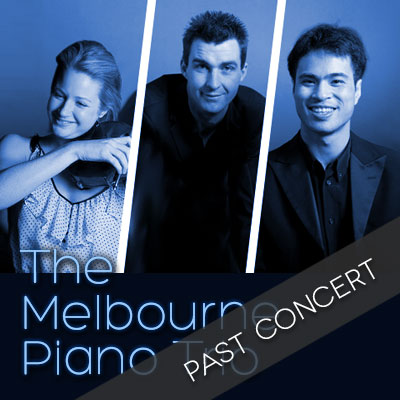 Melbourne Piano Trio (MPT) has quickly established itself as one of the most dynamic and sought-after chamber music groups in Australia.  MPT combines the versatile and unique talents of three young Australian musicians: violinist Caroline Hopson, cellist Chris Howlett and pianist Hoang Pham.

In 2011, MPT began their season with debut performances in New York before returning to Australia where they completed two national tours, performing in major concert venues in Sydney, Adelaide, Brisbane and Melbourne.  In addition, MPT toured regionally and was invited to perform at the Bangalow Music Festival and at the gala opening of the Melbourne International Chamber Music Competition at Government House in Melbourne.

Highlights for MPT so far in 2012 include performances at the inaugural Sanguine Estate Music Festival, a Mother’s Day concert in support of Breast Cancer Network Australia at Melbourne Recital Centre, a performance for the Friends of the Sydney International Piano Competition and performances in major chamber music series across Australia in regional and major centres.

MPT tours Europe, New Zealand and China in 2013 and have released recordings on the Master Performers label.

Chris Howlett has been a prize winner of numerous chamber music competitions including the Asia/Pacific Chamber Music Competition and Trio di Trieste International Competition.  He has studied at both the Australian National Academy of Music and the University of Melbourne.  Chris is the Festival Director of the Sanguine Estate Music Festival and a 3MBS board member.  He performs on a Thomas Kennedy English Cello made in 1820 and would like to thank those who have generously supported him in the purchase of this new cello.

Hoang Pham frequently appears in all the leading recital series in Australia and has performed with the major symphony orchestras of Melbourne, Queensland, and Tasmania.  His recital appearances overseas include England, France, the USA, and, recently, the 2011 New Zealand International Piano Festival in Auckland.  Hoang was awarded the prize for the Best Australian Pianist at the 2008 Sydney International Piano Competition and is a former winner of the Lev Vlassenko Piano Competition.  He currently studies in the prestigious Artist Diploma program at the Royal College of Music in London.  Previously, Hoang was at Manhattan School of Music for six years.

Note: due to unforeseen circumstances, this programme has been updated and will be performed by piano and cello.