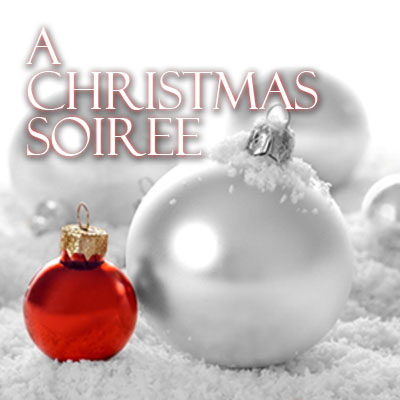 Featuring highlights from Handel’s Messiah and other uplifting seasonal favourites.

Bring your family and friends for some festive fun and a chance to find your ‘inner voice’ and join in with us on some of the carols.

Alex Robertson-Jervis, has been performing in eisteddfods and music festivals from the age of 5. Alex studied at Sydney University, Conservatorium of Music (Diploma of Opera) & Griffith University, Queensland Conservatorium of Music (Post grad. Dip Opera and Master of Music, Perf). Prizes include the Inaugural Brisbane Club Award, the Elizabeth Muir Prize and recipient of the Encouragement Award and Finalist in the Herald Sun Aria in 1995. She then joined Opera Queensland as a Young Artist and toured regional Queensland with them, prior to leaving for Europe on an Elizabethan Trust Scholarship to further her studies abroad.
Roles performed include: Mimi/La Boheme; Cio Cio San/Madama Butterfly; Donna Elvira/Don Giovanni; Mrs Jessel/Turn of the Screw; Countess/Nozze di Figaro; Tatiana/Eugene Onegin and Helena/A Midsummer Night’s Dream, which were performed in Festivals and concerts across Europe & the Americas.
Upon her return home to Australia, Alex was offered the role of Artist Manager at one of Australia’s largest classical music management agencies, Patrick Togher Artist Management. In this role, she managed over 30 renowned operatic and concert artists. It was here, that Alex felt that her true passion for artist management came alive.
Alex is now based in the Northern Beaches of Sydney with her husband and enjoys a diverse musical life, managing classical musicians in her own company, Diva Management; vocal teaching, adjudicating and encouraging the promising young talent and stars of the future we have here in Australia. Alex is also the Music Director for Music At Manly.

Bronwyn’s love of singing was nurtured at school and then at the University of Sydney where she participated in many musical productions including the first Intercol shows whilst she was earning her Bachelor of Arts. After graduating from the University of NSW with a Bachelor of Law, she briefly worked in the Law industry before the lure of the performing arts led her to the Opera School at the Sydney Conservatorium of Music.
Appointments include: Member of the Board of the Opera Foundation Australia from 2009 until present; Member of Women’s College Council, University of Sydney (1997-2000); Assistant to the Development Manager at Sydney Conservatorium of Music (1997) and Development Manager for Youth Music Australia (1995-1996).
Bronwyn performs regularly at private events, fundraisers and corporate functions both in Australia and Overseas. She also creates wonderful pieces in her own jewellery design business ‘Be-Adorned’.

Katherine studied at the Royal Northern College of Music, Manchester with Paula Anglin. Her repertoire includes operatic roles, oratorio and Lieder. Operatic roles include Marcellina in Mozart’s Le Nozze di Figaro at the Purcell Rooms, London Southbank, Cherubino in Mozart’s Le Nozze di Figaro, Mercedes in Bizet’s Carmen, Third Lady in Mozart’s Die Zauberflöte,, Dido in Purcell’s Dido and Aeneas, Misha in Tchaikovsky’s The Queen of Spades, Handel’s Xerxes, Cavalli’s La Calisto, Dukas’ Ariane et Barbe-bleu and the title role in Wilfred Josephs’ Rebecca. Katherine has frequently performed Oratorio and Lieder in recital throughout the UK. She has performed at the Cheltenham Festival and on BBC Radio 3 with Emma Kirkby.

Born in Port Macquarie and now living in Sydney, Joshua holds a Bachelor of Music Degree from the University of Newcastle, majoring in voice.
Joshua has worked with Pacific Opera as a Young Artist, Newcastle Festival Opera, Opera Hunter, and Cantillation.
Joshua played the principal role of Masetto in Don Giovanni for Sydney Independent Opera in November.
His other roles include Giuseppe (The Gondoliers), Schaunard (La Boheme), Escamillo (Carmen) for Opera Hunter, Readymoney Matt  (The Threepenny Opera), and The Speaker (The Magic Flute) for Newcastle Festival Opera.
Recent performance highlights include Handel’s Messiah for The National Trust, Last Night of The Proms with Cantillation and the SSO, Opera in the Church in Gloucester, and ‘An Evening of Gilbert and Sullivan’ hosted by the Opera and Arts Support Group.
Joshua has performed on the concert platform, recently as Baritone Soloist in Mozart’s Requiem K626 and Vespers K339 with The Newcastle University Choir and Christchurch Camerata. He also performed as Baritone soloist in Faure’s Requiem with The Hastings Choristers.
As a chorister Joshua works with Cantillation, and was a member of the University of Newcastle Chamber Choir and toured the United Kingdom and France with the group, singing in such prestigious venues as Notre Dame, Paris, Westminster Abbey, London, and St Paul’s Cathedral, London.

John Martin’s work is very familiar to concert goers and listeners to Australia’s classical radio networks. He has been featured three times on ABC Classic FM’s Drive Time segment ‘On the Verandah’. He is a former recipient of grants for overseas study from the Australia Council Music Board and Opera Foundation.
The first half of 2012 saw John touring Australia and New Zealand  for the second time in ‘Dickens’ Women’ with acclaimed British actress Miriam Margolyes, after which he performed in a series of recitals as half of the Jacono-Martin Duo with violinist Victoria Jacono-Gilmovich, along with other concert and show engagements.
John was M.D. several times for ‘Australia’s Got Talent’ winner Mark Vincent, and for many years has also been M.D. for The Australian Tenors and ‘Remembering the Carpenters’ with Lisa Budin. He has just done four shows as M.D. for Marina Prior and David Hobson. For many years he has performed in partnership with Australia’s best known singers and instrumentalists, and is current vice–president of Art Song NSW.
In addition to his work as a performer, John is now gaining a reputation as a composer with over two dozen works published.